FrameIT is a novel approach for building serious games by combining the exploration of virtual worlds with logic-based knowledge management (… details, publications, news)

The UFrameIT project was initiated by the KWARC Research Group at FAU Erlangen-Nürnberg (… news, team, history) to advance the FrameIT method and to create an appropriate framework for it.

Try it out yourself

The UFrameIT Framework and Serious Games 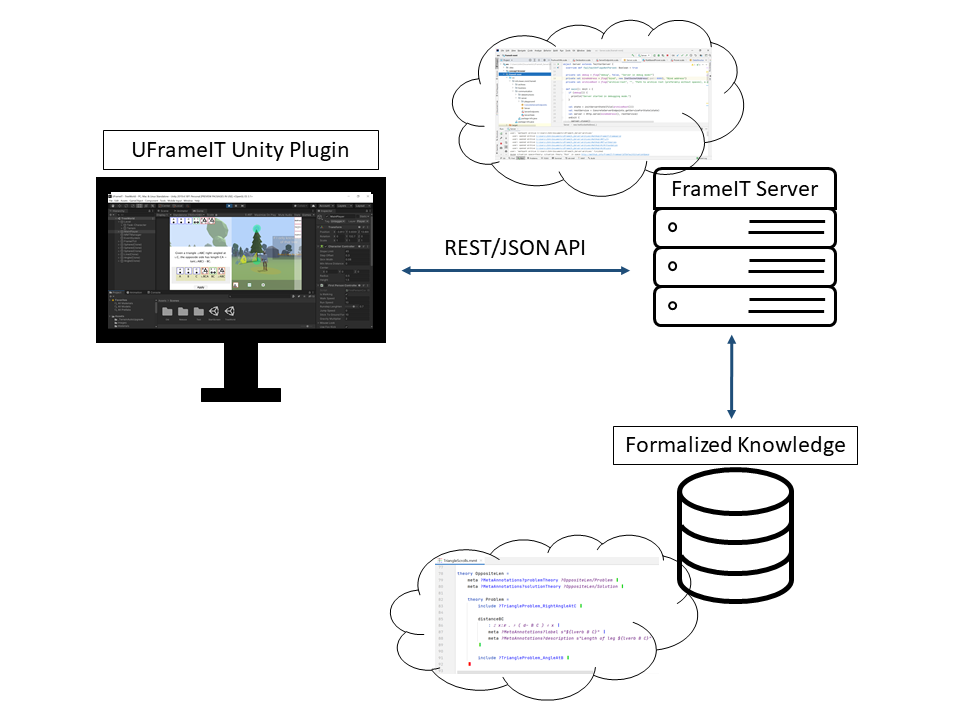 Accordingly, the implementation is split into two parts that communicate via a REST/JSON API:

A particular UFrameIT game instantiates the framework with

The latter builds on builds on the Math-in-the-Middle Ontology (MitM) — a general-purpose formalization of elementary mathematics developed and maintained by the KWARC group at FAU.

The UFrameIT framework and games based on it are open source. They are developed publicly on GitHub (documentation, issues, milestones)

We are an open team of developers, please feel free to join.

The idea behind FrameIT was already formulated in a paper in 2012. A very first version was implemented in a 2013 bachelor thesis. In 2015/6, Denis Rochau gave a complete implementation based on the Unreal Engine (Bachelor’s Thesis; CICM Work-in-Progress Paper, demo video).

After a long period, where students with graphics and game development expertise didn’t find their way to FrameIT, the cooperation with the Chair of Visual Computing brought together a group of FAU students in late 2019 to restart the project. The UFrameIT framework using the Unity game engine as a basis is the result of this effort.

To contact a human: reach out to Michael Kohlhase.

Feel free to raise an issue at our UFrameIT/UFrameIT repository or a question on our Mattermost FrameIT channel. The latter is public, too, and you can easily join by authenticating with your GitHub account once.